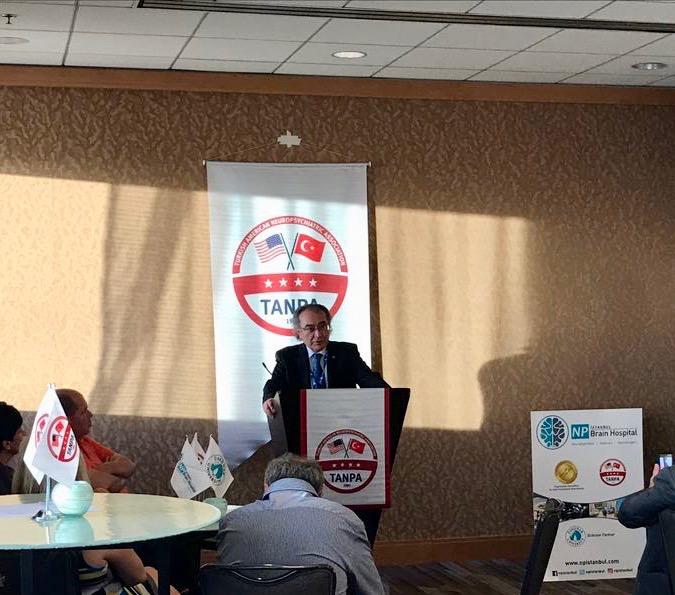 Prof. Nevzat Tarhan was born in Merzifon in 1952. He graduated from Military High School (1969) and İstanbul University Cerrahpaşa Medical Faculty (1975). After the GATA internship as well as Cyprus and Bursa continental service, he became a Psychiatrist in GATA in 1982. He became assistant professor (1988) and associate professor (1990) in GATA Haydarpaşa after serving as a doctor in Erzincan and Çorlu Hospitals. He served as a clinical director. He became Colonel (1993) and Professor (1996). He was an academic member at Yüzüncü Yıl University and an expert at the Forensic Medicine Institute between the years of 1996-1999. He retired at his own will. In 1998, he was the representative of Turkey in Memory Center of America.

Prof. Nevzat Tarhan is a scientist who has succeeded in combining his beliefs, thoughts and ideas in his life and has carried the results to his personal and social life. He has published his knowledge of psychiatric specialization, which he has been relying on for so many years based on great effort and research, in over 100 publications and 31 published internationally. Due to his works presented in visual and written media, he has reached a large amount of audience in Turkey. He carries out his work with great seriousness and precision. He is a person who spends the same amount of effort and gives the same amount of care from a small business to a large international project. He starts the projects with a student responsibility and excitement during the research phase and he presents his knowledge, experience and know - how accumulated over many years in the projects. He is able to present his experience to all his business partners with the support of knowing human psychology well.

The main factor behind the hard work and success is his philosophy of life and his perspective of faith. The vision of life which is not limited to the world but which includes both the world and the afterlife stems from the consciousness that it is in the presence of the Creator while performing every work. This is to present his principles of faith, which are based on asceticism, observation, and proof by combining knowledge in the testimony of the universe and presenting it in front of his readers through establishing a connection with the characteristics of Allah reflected in the world. He is one of the rare scientists who has succeeded in expressing the link between the universe and the Qur'an. In addition to succeeding in adapting his scholar identity to his life, he conducts a discipline in his life on carrying out the truths he has learned and transferring to others.

The source of his different point of view is the Qur'an, which he has read since his youth and it has guided his life, He too has dealt with subjects just like many youngsters questioning the meaning of life and existence such as “Random Existence, Meaning of Life, Darwinism, Why Evil Exists, the Need of Religion, Psychology of Belief, Is There Life After Death, How Does Human Mind and Spirit Provide Satisfaction?”. He proved his point of view with the readers through the explanations from Qur'an and scientific investigations.

As Tarhan closely observes the social life due to being a psychiatrist, he makes an accurate analysis of the social life and touches on the importance of "Community Psychology" in every media platform.

His features are not limited to the ones mentioned above. Prof. Nevzat Tarhan has always targeted investment in people and used his material-spiritual resources towards this direction.  The majority of the society witness all that is done. He expresses through his actions that he will continue the same objectives until the end of his life, under his approach of the faith.

Currently; he is Uskudar University's Founder and, the President of the Supreme Council of Management and he is leading Turkey's first neuropsychiatry hospital NPISTANBUL Brain Hospital's Management Board presidency duties.”

He has more than 100 publications, of which 31 are international. He speaks English and German.

He has two children.

Some of the Magazine and Occupational Congresses He Led

- 1989, "Stress and Diseases". - 1991, "Innovations in Psychopharmacology". - 1992, "Violence". - 1993, Prof. Tarhan organized a symposium on “Serotonin” in Turkey that was attended internationally for the first time. - Conducted editorship for six years of “Clinic Psychopharmacology” journal.    - Participated in Regulatory Board of 7th International ECNS Congress that was held in İstanbul, 2010.

Some of His Occupational Awards:

Some of His Social Responsibility Works:

Published Books: (The copyrights of all the publishing books donated to İDER Foundation.)

8- Family School, Reasonable Solution, Guidebook for Communication in the Family (2004)